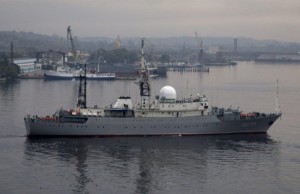 During the past few weeks, the U.S.’s forty-fifth President has been trying to form his new administration and the Russian spy ship Viktor Leonov has been patrolling just outside of the U.S.’s territorial waters near our Norfolk Naval Base. What is President Trump to make of this scenario? What are we who enjoy reading a good novel to make of it?

Those of you who have read our 2016 release of ‘The Looming Storm” might already have a good idea of what the Victor Leonov is up to. Will the Russian spy ship proceed to Havana, Cuba? It was in Havana in January of 2015. As some know from reading ‘The Looming Storm’, the Leonov may be collecting electronic intelligence about the U.S.’s secrets. While in Havana, could it be dropping off Russian spies who will then sneak into the U.S.? Or, might it be picking up Russian spies who have completed their spying in the U.S. and have made it back to Cuba laden with stolen secrets?

If you watch the news, you will know that politicians in the Congress might summon Defense Department officials up to Capital Hill to brief the Congress on the suspicious activities of the Leonov. Of course, you would also know that if you had/have read ‘The Looming Storm”. Uncanny isn’t it? We’ve been accused in the past of disclosing secrets from our past service in the Government, but we never have. Once again, the fact that events portrayed in our latest novel are occurring so soon after our thriller’s release, are only a coincidence.

We’d like to say thanks too for all of you who encourage us to keep writing. Here is a list of the places we will be appearing in the next couple of months. Many of you are asking about our next novel … can’t reveal too much just yet except to say we are hard at work researching and devising some very interesting twists.

Be Blessed and Be a Blessing,